As a GP and comedian, Dr Ahmed knows all about the benefits of having a bit of humour in life. He has a short message to share with us here about doctor wellbeing.

Get a dose of humour by watching Dr Ahmed live! He will also be performing in the Perth Fringe (tickets on sale now), and will be performing on March 31st for 3 nights at Chapel off Chapel for the Melbourne Comedy Festival (tickets not on sale yet, so keep an eye out!).

If you need some light comic relief, watch Dr Ahmed share a funny anecdote about a urine sample:

Hear Dr Ahmed’s suggestions about how doctors can look after themselves first. I’m sure his suggestions apply broadly across many professions and other roles in life.

The Royal Australian College of General Practitioners share this article about Dr Ahmed in 2019:

Many doctors are struggling with issues of mental health and burnout. Can comedy help?

When Dr Ahmed Kazmi’s father passed away in 2015, the Perth GP found himself struggling with life’s meaning.

So what did he do?

‘My natural instinct when Dad died was to go and do a Master’s,’ he told newsGP. ‘That’s how doctors are programmed.

‘It felt so self-indulgent to do something creative.’

But for the first time, Dr Kazmi shelved that programmed instinct. He decided that since life was short, it was time to try his hand at stand-up comedy.

‘I wanted something to offset the hardships. Life’s short, go for it,’ he said. ‘I decided I’d do my first show for charity, so if it was terrible at least something would come of it.’

Turning the medical world into comedy had an unexpected benefit.

‘It was very cathartic. Any performer will tell you there’s therapy in their art. You can use it to exteriorise things,’ Dr Kazmi said.

‘In my first show, I talked about my dad and I did find it healing.’

Three years later, Dr Kazmi has gone from performing in the back room of a restaurant to sell-out shows and opening the Perth Fringe Festival in a 600-person theatre.

And, along the way, he has found that comedy is an excellent tool for doctor wellbeing.

‘Unfortunately, doctor burnout and suicides is a growing issue. When you do a job so long, you can get stuck concentrating on the medical side and lose sight of self-care. But we have to look after ourselves first,’ Dr Kazmi said.

‘Doctors go into their medical career with lots of interests that all slowly dwindle as work and family commitments grow. So I give a gentle reminder: if you used to play rugby or clarinet, why did you stop? Could you resurrect it?’ 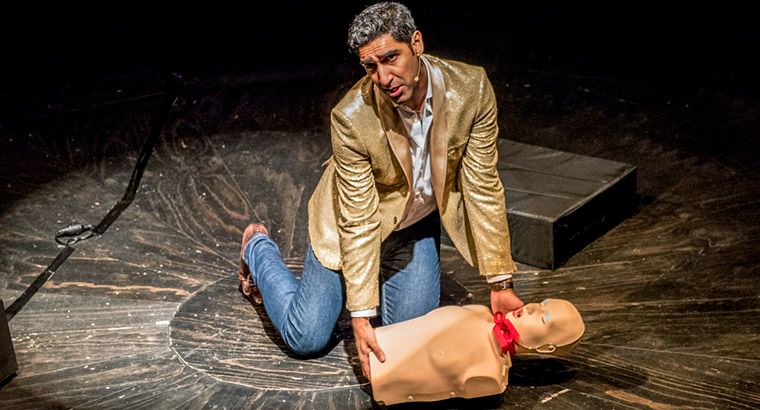 Doctor in the house: Dr Kazmi blends medicine and humour.

Dr Kazmi moved to Australia from London in 2014. He believes his comedy career would have been harder to pull off back in the UK, where people are much more formal in their interactions with doctors.

‘In Australia we’re much more informal, we call the doctor by their first name – you’d never do that in the UK,’ he said.

As it turns out, a life in general practice provides excellent material for comedy routines.

‘I think people are funny, full stop,’ Dr Kazmi. ‘Real life is humorous – and then if you’re seeing people in consultations, by default, you have fodder for humour.

‘One of nice things about general practice is that it’s a cradle-to-grave speciality. You see all ages, all relationship statuses, people who are happy, sad and everything in between.’

‘It can be an emotionally taxing job, due to the nature of the work. If you don’t have boundaries, it can be easy to feel burned out or emotionally weighed down,’ he said. ‘So where it’s appropriate, I use humour in my consultations. Patients are usually very receptive – they say, you’re human.

‘When I was trained, we were taught the two things – medicine and humour – were mutually exclusive. But comedy has helped me find my consulting style.’

The trick to Dr Kazmi’s comedy is striking the right tone.

‘Police, firemen and doctors are constantly interacting with elements of life most people might see once or twice in a lifetime. So your reference points are different, and that does change the way you see things,’ he explained.

‘I don’t have dark humour in my shows. Dark humour is a coping mechanism.

‘I want to create a show where people feel they want to come and see me as a doctor afterwards,’ he said.

‘My stories are about the human condition – the funny things people do en masse.’

Dr Kazmi also wants to use comedy as a way to show the public the pressures placed on doctors.

‘My last show’s tagline was, “Why are doctors always running late?” and people left thinking there are reasons for that, like patients saving the most important thing till last in the consultation. “By the way, doctor, I think I’m having a heart attack”,’ he said.

After his last show, many patrons came up to say they’d never thought of their doctor in that way before.

‘I’d like people to leave thinking their doctor is an actual human. I want to show doctors in a three-dimensional light, to show maybe it is challenging being a doctor,’ he said.